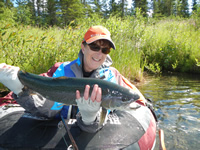 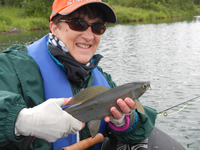 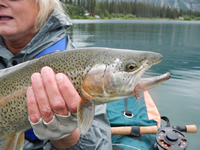 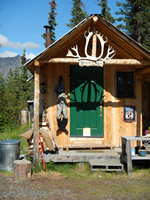 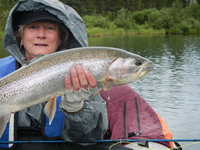 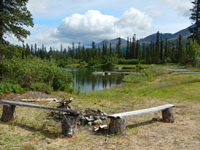 ADVENTURE DENALI DELIGHT!
​   A great "first" trip to this super destination was all we'd expected and more! Lots & lots of big fish, exceptional location, a fun group, and pretty good weather. What more could you ask?
We met our host, Kirk, the owner of Lake Chavey, and he took us right out to the doc for a look at his fantastic rainbows & grayling in order to get us even more excited than we already were. He reminded us that we were the very first float tubers to enjoy the lake.  As we watched, big, beefy bows appeared below us like dark shadows, and grayling with their remarkable fins unfurled were tempting us to get our waders on and our float tubes in the water.
The group had some learning to do, having never been in a float tube before, but they were casting and paddling like pros in no time. Linda was the first to hook up as 28-inch fish chomped  down on her orange bead-head leech and took off for the other side of the lake.  In spite of never having fly fished before, she did a masterful job of managing him with only a little guidance from me. "Wow, wow, wow" was all she could say as she caught her breath while holding the fish up for a picture. That was to be the first of many more fish over twenty inches that they had to their credit before it was all over.
Not only did they have to learn how to let the line slide out after they set the hook, but they also had to learn when to paddle, and when to sit tight and let the fish run. Sometimes they did one thing well, and then had a problem with something else, but like most beginners who stick with it, they were accomplished float tubers in no time.  "Don't hold on to the line - let the fish run," they reminded each other as a large fish broke one or the other of them off.
We used sink-tip lines and various woolly buggers and lake leeches throughout the trip. Olive, brown and orange seemed to be the most successful. One morning Stephanie hooked at least a half dozen large specimen with a small bead-head marabou leech on a #6 hook, and Linda hooked and played just as many with a bright red bead-head bugger. We had started with some larger flies, but, in the end it was the smaller flies that did the trick.
We also got into a school of nice grayling one morning and caught and released over a dozen before they moved on to a different part of the lake. Beautiful, 14-18-inch fish, they were eager to take both gold-ribbed hare's ear nymphs as well as #8 marabou & bunny leeches. They were rising like crazy a couple of times, but by the time we discovered what fly they wanted, the hatch was over or the rain was back. Constantly changing weather and atmospheric pressure were clearly affecting both species.
The cabin we stayed in provided us with a kitchen and bathroom and a place to sit and have our wine while the rain poured down outside. It even had Wi-Fi, but the I-Pads just didn't have enough power to get it and keep it operating so we used them to view pictures, and then got our e-mail on a computer that one of the women had with her.
We opted for some creek fishing our third day and headed over to the Denali Hiway for more grayling fishing. Although we had pretty good weather, the creeks were nearly over their banks with very, very, dirty water from the heavy rains of the previous few days. With a great deal of persistence we managed to pick up some fish on Czech nymphs which I always carry with me. We started hiking down the stream, but changed our mind after awhile because the water had washed out both the bank and the trail. We finally called it a day and opted to look at pictures on the I-Pad while having a great dinner at one of the notable restaurants between Cantwell and the entrance to Denali Park.
Returning to the lake the next morning, we got right down to business and had hook-ups right away. The gals had decided that they wanted to learn now to net their own fish from the tube since this was the last day of our trip, so we practiced and practiced how to bring the fish to you in the tube and how to maneuver the tube so as to get the fish coming head first into the net.  Since these were bigger fish than the nets were used-to, we had some hilarious tries on fish determined they were not going to stay in them. Stephanie must have made four attempts with one fish before her determination won out and the fish stayed put while she removed the hook.
We were really bummed out when the trip was over. Vowing to visit the fish again next summer, we took a few last pictures of the early morning light on the mountains and then headed back for Anchorage.  Thanks, Kirk!
~Pudge