Adventure Denali Float Tubing August, 2015
​    Our late August trip to the fabulous fishing at the catch and release float tube lake at Adventure Denali near Denali National Park was a real hoot! Everyone loves the float tubes, and Chavey Lake, and its two other companion lakes, are the perfect place for them. Whether the rainbows are large or small, everyone gets a big kick out of paddling around with a fish at the end of their fly line.
Aimee, Joy, and Barbara all caught lots and lots of very large fish this trip. Barbara started us off our first day with one 20+ inch rainbow after the other on an olive wooly bugger. The rest of us quickly rummaged around in the fly boxes to locate something similar, and the catching just kept getting better and better all afternoon.
At dinner time, we retired to our cozy little cabin for a wonderful chicken dinner and a glass of wine while we looked at each other's pictures for the fish of the day. Aimee and Joy, two avid fly fishers from North Carolina, had rented a small motor home so that they could do a little traveling around Alaska before and after our trip, and since they had been virtually all night on the plane, we made an early night of it.
The next day saw the success rate just as good as the day before, so we decided to fish what AD calls the "middle lake" in the afternoon. Because this lake doesn't have a good place to launch the tubes, we fish it from the bank. Lots and lots and lots of smaller fish (12-15 inches) were easy to come by with whatever small leech or a tasty nymph we put in the water. Only occasionally did one of the 20-inchers in that lake come to the flies. We'd see them approach the fly and then nonchalantly drift off without pursuing it. No matter how we stripped the line, it didn't seem to matter. They just weren't interested. It was hard to complain about catching 30 or more fish for the afternoon, however.
Dinner that night was spaghetti accompanied by a salad of some of the four types of the incredible fresh lettuce from the camp's garden. Kirk, who owns the camp, had invited us to harvest as much as we wanted, and we took him up on it.
Day number three saw us on lake #3, known as North Lake where we absolutely couldn't miss catching Arctic grayling after Arctic grayling---my very favorite fish! The lake was absolutely packed with them, and we had just the fly they wanted. Barbara just couldn't seem to keep them off of her fly. "Doubles" and even some "triples" marked the morning, and Joy caught the largest grayling I had ever seen in any of the three lakes. It had a huge girth, and it was obviously a very old fish. Then, when Aimee paddled onto a different area in the lake, the rainbows showed up one right after the other.
Later in the afternoon we returned to Chavey for a few more big fish before heading out to one of the nearby small restaurants on the way to the National Park for a scrumptious dinner. All that catching makes for hearty appetites.
Our last morning seemed to be tailor-made for Joy and an un-named streamer she had bought in a K-Mart store just before leaving home. A bright, lime green concoction, it seemed like it had a 20+ inch fish attached to it all the time. You guessed right, it was VERY hard to deflate the tubes and head for home. Come on along with us either in June or August, 2016!!
~Pudge 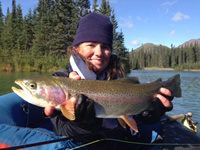 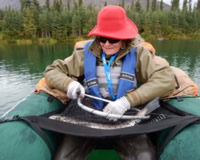 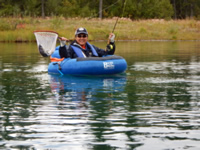 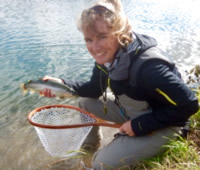